Up to DPC level 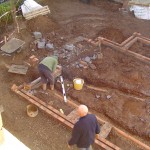 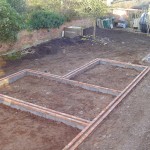 After the drains had been laid under the floor, they were back filled and the ground levelled.

As the drains wouldn’t be accessible once the floor was finished, they had to tested and several rodding points incorporated. Due to the possibility of flooding we also had to fit non return valves, so that floodwater couldn’t enter the property through the drains.

All foul drains will be connected to the main sewer in the road, but all surface water is going to be retained on site and stored in our 6500l harvesting tank to be reused for flushing toilets, washing clothes and watering the garden. 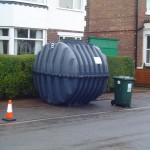 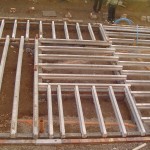 Leaving a void above the backfilled soil, the concrete beams were laid out to create our ground floor structure. Between these beams concrete blocks are laid flat, over which our damp proof membrane and insulation was laid. 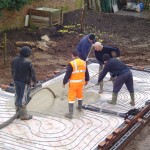 Our underfloor heating pipes were then stapled to the insulation, at regular centres. The house will be split into several zones per floor, all off which will be heated by the ground source heat pump. Once tested under pressure, the pipes were then covered by a liquid screed. This fibre reinforced screed was pumped from a ready mix lorry, and was self-levelling which made it very quick to lay.

We had programmed the drillers in just before Christmas to drill our 2no. 85m deep boreholes for our groundsource heat pump, but they let us down at the eleventh hour.

We left our screed to cure over Christmas, whilst looking for another drilling contractor !